This is another Olympus and Movie Maker project using Pigs (2MB). The film was made in just four hours in one evening and tells the classic nursery rhyme "this little piggy went to market"

The Olympus was setup on a tripod. The focus for manual / macro and white balanced on some paper. A series of images were taken and uploaded to a PC. These were assembled in Movie Maker to produce 6 short wmv files. The frames were imported using a fixed period of 0.125s per photo. These 6 short clips were reimported into Movie maker and a single frame was put each side of the clip.

This then allowed a simple fade out to black and fade in to be added to these single frames and the pacing of the film was controlled by varying the lengths of these frames without the need to go back to adjust the clips.

The set was a piece of carpet drapped over a table and worktop to produce an effect similar to a photographic studio. This was lit using the same natual light dimmer as devised for Ratobat .

Finally the title page and credits were added using with Movie Maker and the whole lot exported as a WMV file.

If you are a pig fan then you can buy pig books and videos at Pigs Might Fly. 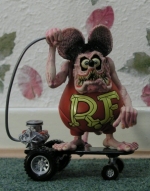 A stop motion piece made with an Olympus 5050Z digital camera, Jasc Image Robot and Microsoft Movie Maker. A performance of an acrobatic Rat on a Motorised skateboard to a Punk music tune.

A similar stop motion model animation process was done with a squashy children's toy and some cigarellos. Little Man, Big Cigar (800K) is a brief but cautionary tale of the perils of smoking cigars in a confined space. Created using Animation Shop from Jasc.

This was made a few years back with a little Casio digital camera. I animated some beer bottles over the course of an afternoon. This was done by taking each picture in turn and loading into the Gif Construction Set this was saved as an AVI and the sound was added using the AVI editor which comes with Visual C. It has since been converted to a wmv to save space and download time.

Back in the days of Student Television of Imperial College an animated short about money and corruption was made using a stack of old BBC video distribution amplifiers. Using an old Sony portable UMATIC recorder a tripod and a mains supply the animation was made with excessive use of the pause button and a each frame had to be setup quickly before the recorder went into stop mode. According to my technical advisers afterward, I could have wrecked the head of the recorder. However according the the production staff beforehand, it was wrecked already. The origional recording might still be in the STOIC archives but this recording here has a poor quality sound track.

Some suggested stop motion books and videos can be found at the Stop Motion references page.